We celebrated my friend Karen’s birthday here.
We had arrived in St Ives from an overcast London only that afternoon, so it felt pretty magical to be dining by the sea that evening.
Being honest, I found the décor and the clientele a little chi-chi for my tastes, but it was redeemed by nice staff and food that really delivers.
On the  chi-chi factor, Porthminster’s Beach Café does have the sense of a place that ‘considerably richer than you’ folk go to show off.  Where scoring a reservation in high season is a sign of your standing in holiday-home society.
I’m being a bit unkind considering I did rate the food.
I had monkfish curry – generous on the fish, excellent on flavour, strewn with coconut flakes, and crispy onions to liven up the rice.  The cheeseboard that followed featured a magnificent Cornish blue, fig paste slithers and bountiful crackers.
Karen had whole lemon sole and Nga had mussels. There were murmurs of approval all round.
As an aperitif we made a good find – a Camel Valley sparkling wine, which was a dark rosé in colour but not sweet. And we had a good Viognier with dinner and delicious dessert wine with our cheese (not dessert) because I steer clear of Port if I’m sober enough to remember to. 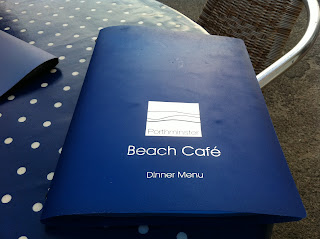 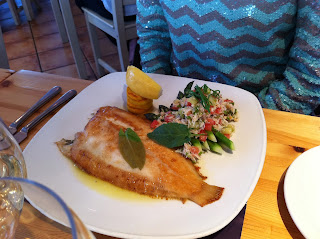 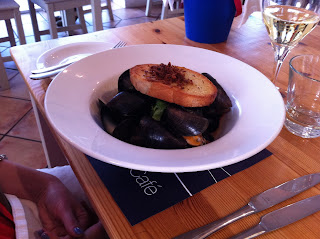 After dinner, we hurried back into St Ives town and to the Kettle n’ Wink, where we found the sexier, Cornish versions of Crazy Heart and David St Hubbins jamming in a locals pub.
A great band, they sat around a table, as if they had just intended to have a drink with each other, but couldn’t resist bursting into a set.
Wings, Neil Young, lots of Blues – they even made me re-examine my usually staunch views on Elbow.
A couple of pints of Proper Job and two Jamesons later, and I wanted to move here.
We discreetly papped Crazy Heart, band leader and musical virtuoso, for posterity. Crazy only played the songs he wanted to play and it appeared that everyone else in the band played only for Crazy’s admiration.
He’s the blueprint of how I want Sartre to age.  But he’d better start working on his beard now because you don’t get that density of pile without years of grooming.