This exhibition is a brilliant, mind-opening way to spend an hour.

Interestingly, it’s been organized by the Catalan Tourism Authority - I struggled to see how a shrine to an impossibly great thing that’s no longer there anymore is going to boost tourism.

Ferran Adria’s achievements are hulking - he was Head Chef of El Bulli aged 25. Inspired by Nouvelle Cuisine pioneers Michel Bras and Pierre Gagnaire, he set about turning the restaurant scene on its head. He truly is the godfather of molecular gastronomy, even though he is said to dislike the term. I smirked at one unenlightened exhibition-goer proclaiming loudly to her friend that it was “all a bit Heston.” 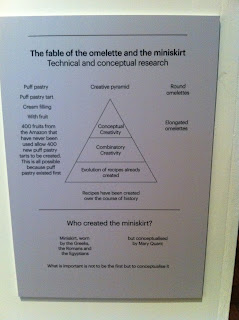 The thing that struck me was the way Adria approached cooking with a child-like innocence and no historical baggage. He simply thought – forget what’s gone before, what could cooking be like?  There’s a saying that “the creative adult is the child who survived” and that was in evidence here. Suddenly edible airs, foams, spheres, caviar of every material, disappearing ravioli and deconstructed cocktails all make perfect sense. 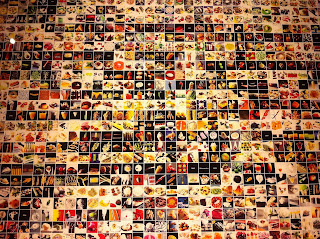 Adria was the first chef to establish a workshop, in which he could develop new techniques, methods and dishes in the months when the restaurant was closed.
He was the first to seriously import industrial equipment into the commercial kitchen, from PVC tubes to silicon moulds and liquid nitrogen baths. A creative agent provocateur he most certainly was.

It occurred to me, probably for the first time, how much inspiration Adria drew from Japanese cookery – both new methods of cooking and the Japanese knack for exquisite presentation.

It’s also an exhibition about the power of purpose. Once you’ve declared “creativity means not copying” you’ve set yourself on a clear path. Experiment, invent, and try things never applied to food before.

I was fascinated by how well the team at El Bulli understood marketing. The French bulldog branding is everywhere (the "bulli" after which the restaurant is named), the romanticism of approaching the restaurant by water, the scarcity value of shutting the place for half of the year. 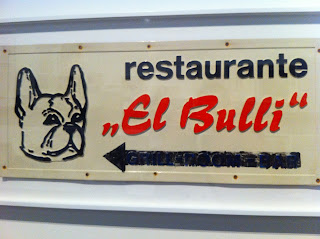 His food was designed to appeal to a sixth sense, in addition to the five senses you’d normally consider as part of the experience of eating.
And that sixth sense might be surprise, or irony, or amusement.  He didn’t mind – provided it engaged his diner on a visceral level.

For me, this exhibition left none of my senses unprovoked. There’s theatre and pomp, which the more cynical visitor might think is a bit much considering we’re talking about someone who cooks dinners for a living. It’s not brain surgery.
But I thought it was a treat. And beware the debilitating envy you’ll feel for those who managed to eat at El Bulli before it closed its doors.