Welcome to Gentrified Central. Population: 60 smug Islingtonites and 60 masochists who have to traipse through the leafy lanes to get to The Albion and witness the area's majestic beauty.

A Sunday afternoon feeling a little bit ropey from the night before.

Rib of beef, Yorkshire pudding and a glass of red did me the power of good. I felt rather like Jake from The Sun Also Rises.

"I ate a very big meal and drank three bottles of rioja alta."

The only thing that let the roast down was the watery and flavourless gravy. It is not enough for gravy simply to be wet.

The garden at this place is really the draw. Everything else - the food, the decor, the staff - is what you'd expect from a pricey gastropub in a chi-chi part of town. Which is not to say that isn't exactly how you want to feel from time to time.

But the back garden genuinely delights - somehow they've contrived for it to feel smart and well-heeled yet tranquil and arboreal. You could be in the patio of a boutique hotel in Moreton-in-the-Marsh rather than Zone 1.

And there we stayed.

Jason Atherton has a link with my previous El Bulli blog post, as he was the first British chef to complete a stage there in the late 90s.

I love Pollen Street Social with reckless abandon, so I was insistent about trying his new haunt on Poland Street in Soho.

Social Eating House's branding is a typographer's dream - it would make Rudolf Koch melt in the middle. Inside the restaurant, its beautiful gilded logo is kept company by shiny gold pig heads, vintage crystal glasses for cocktails, and copper and leather as far as the eye can see.

It's a distinctly Gatsby-speakeasy decor - a little like the fantastic underground den Nightjar, near Old Street. It's got just the right lighting, just the right hubbub and just the right amount of space between tables. This interior is the first of many gorgeous things that you'll encounter on stepping inside.

Sartre and I were dining with my Dad and his girlfriend, Kim. I firmly believe that a restaurant has an impact on the mood of your dining party and we were all on top form. The pewter tankards might have had something to do with it - try drinking Meantime with a frown from one of these: 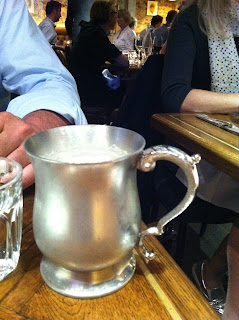 And so to the food.

Ir's clear my photography is not as quick off the mark as the plates arriving at table, because most plates appear to be dressed with an odd chip.

Whilst a chip garnish is a well-known technique of the Shepherdess Cafe's, it is not one of Paul Hood's.
It's simply a sign of the delicious nickability of the chips in the middle of the table.

Observe the roast cornish cod, with cockles and cream. Epic. 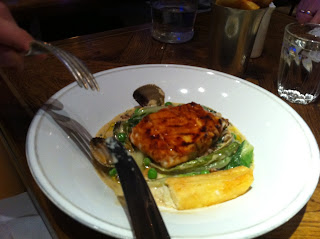 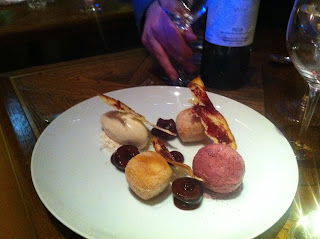 And look at this cheese. I can actually smell it. 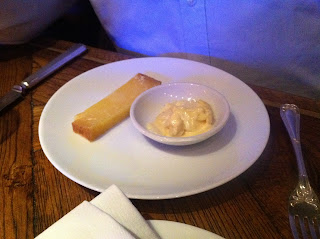 My Dad was particularly upset that the plaice and brown shrimp was sold out. Alas, the waiter's acceptance of Dad's mission to "scour the kitchen for brown shrimp!" was not fruitful. So he went for halibut instead.

Social Eating House is, as the name would suggest, a more relaxed version of Pollen Street Social. And it's got a lot going for it. Make a play for it as soon as you can.