Behold, salute and stand in awe of the justifiably legendary Katz's Deli. 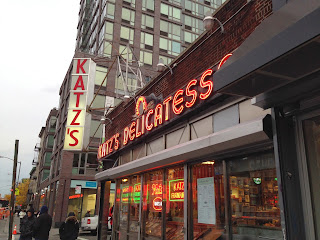 We ventured here partly due to When Harry Met Sally. This is the diner where she fakes it for Billy Crystal.  In fact, that famous piece of film history is marked with a sign above the table where it was filmed. 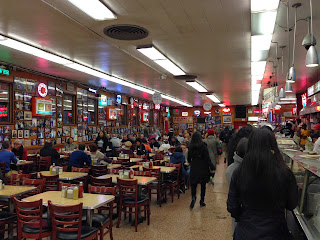 Before you've even got to the eating, it's an evocative experience. It's bustly, neon-bright and as full of locals as it is tourists. They also don't suffer fools gladly. Being 'new to all this' isn't an excuse - you've got to take the Katz experience by the scruff of its neck.

As you step inside, you're given a ticket at the door, which you hand to the guys behind the serving counter when you order your sandwich.  There is a table service section down one wall of the restaurant, but we fancied stepping up to the counter and seeing the construction of our enormowiches up close. We ordered a pastrami sandwich and a pastrami Reuben (like the pastrami sandwich but with added sauerkraut, more cheese than Holland exports in any one year and Thousand Island dressing. Lots of it.) 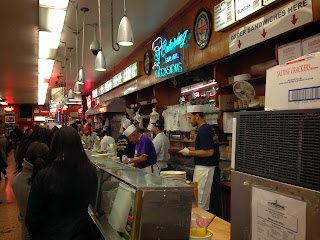 After your sandwich has been carved, grilled, melted and cut in half, you have to walk to a different part of the counter to order beers and chips.
Thankfully, I was talked out of getting chips. Because here is the result. The handiwork of our talented sandwich maker.
Note the pickles in the background and consider a few things. 1. That's an absurd amount of pickles for just two people. 2. Those two people are already having to contend with the giant sandwiches in front of them. 3. The pickles come in two colours according to depth of pickling. The duller green pickles are full sour. The lighter green are half sour. 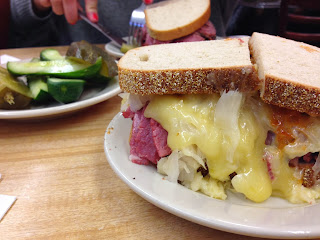 The decision to use knife and fork wasn't borne out of etiquette but rather that there is no other way to tackle the behemoth in front of you.

The sandwich was out-of-this-world. The best pastrami I've ever tasted, all washed down with a Brooklyn beer. 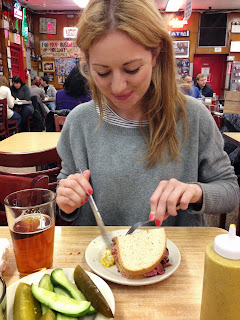 Luminaries including Bill Clinton and Rod Stewart adorn the walls. The faces on the wall of fame eyeballing you as you start to hit the wall about three-quarters of the way through your sandwich. The arrival of the meat sweats coincided with my decision to sacrifice my beer, because it was taking up useful space in my stomach. 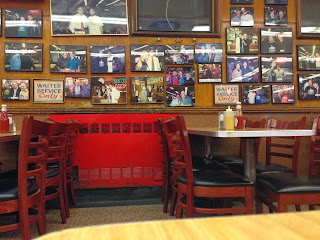 We did it. And we were proud. Our marked tickets were taken up to the cashier at the exit. We paid and slowly paced into the New York night, clutching our bellies and gearing up for the Gaviscon.

Katz's honestly was game over for us. We ate there about 4pm. We forced ourselves to walk for about an hour afterwards to help kick-start the digestion. But by 6pm we were back at our hotel and didn't venture out again.

A day later, at The Strand bookshop, I found the Katz's Deli book. Inside, it revealed that each sandwich weighs the equivalent of an American football. Which might explain why we had to spend the rest of the evening nursing our distended bellies. 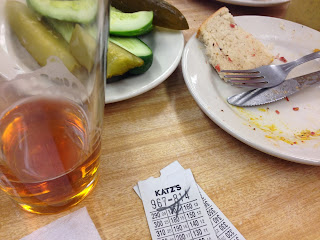 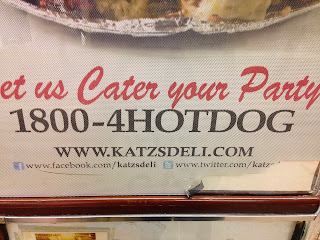 Posted by Unknown at 9:23 pm No comments: