This is a tiny little canteen with seats for about twelve people, incongruously located next to Wall Street, where lobster rolls, crisps and a bottle of local beer are the orders of the day, every day.

(I later discovered it’s not as much of a curio as we first thought, as it’s one of about six locations of Luke’s Lobster in the States. The eponymous Luke grew up in Maine where he fished for lobsters as a boy. Or so his PR advisor asked me to tell you).

We called in here for a spot of lunch. 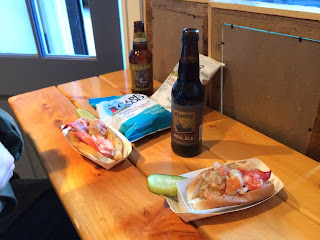 You order at the counter and are given your packet of crisps and beer, while they make up your roll fresh.
The lobster rolls were delicious, sweet and buttery bread, served with the obligatory pickle, and oozing with lobster meat and mayo.
A nice little find in the middle of the Financial District’s lunch-hour.  And significantly more lip-smacking than my lunch-break equivalent of popping out for a Tesco sandwich.

Thoroughly sated, we ambled out into the bracing New York weather and onwards to the Staten Island Ferry. Behold: 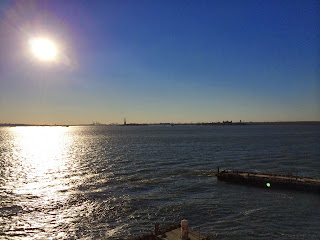