After a craft beer in McGee’s Pub, supposedly the inspiration for the bar in the series How I Met Your Mother, we repaired to Striphouse for our belated anniversary meal.*

Striphouse has a handful of locations in NYC and we went to the one closest to Times Square - but don’t let that put you off.

Clearly the scene of some heavy business deals and nearly exclusively male in its customers, it’s a dark, glamorous and heady restaurant.

The martinis are served strong and dirty, the wallpaper’s risqué and adorned with pictures of vintage glamour girls (earning the restaurant its name) and the steak comes in powerful slabs of very fine meat indeed.

After 6 oysters with cocktails to start, we moved on to a salt-crusted, beautifully-charred 42 oz classic Porterhouse to share. 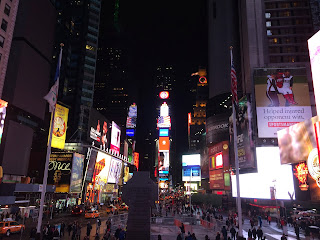 Too coy to take photos in the restaurant

The steak is so good, you know it's going to be a benchmark of all future steak dinners. The cut, the preparation, the cooking of it are all flawless. And the moreish sides, the slick service and the swish crowd, were all on-the-money too.

The whole experience feels like it was designed to make you imagine you’re Robert de Niro in The Last Tycoon. And channelling that when the bill arrives doesn't hurt either. It’s expensive.  But it’s also worth it for a grand old slice of New York glamour and ritz.

*On McGee’s resemblance to the bar in How I Met Your Mother, I’d say the set builders on the show freestyled.
Posted by Unknown at 9:08 pm