The date is 6th November 2014. And I'm hurrying across Spitalfields market to meet Sartre at Aldgate station.

I'm hurrying because he is early and that's unusual.

He is the man I've waited for figuratively and, unfortunately, literally. On numerous occasions, in numerous venues. From solitary-sipped drinks in shabby pubs next to tube stations, to taking in most of a Scott Matthews concert alone due to a late-running client do, I have got used to him being consistently, gloriously late.

This post is about a meal at St John Bread & Wine, which is consistently, gloriously brilliant. We ate tripe, pigeon pie, and buttered greens. We drank their St John house red and we celebrated it as the night we got engaged, which had taken place an hour earlier.

There was no better place to enjoy the night we got engaged than the restaurant in which we had our first Valentine.

St John embodies everything I hope for in our marriage - it's delicious and moreish, it's totally without pretension, it's thoughtful and skillful, and it's honest.

I especially enjoyed the first and last night Sartre was ever punctual. 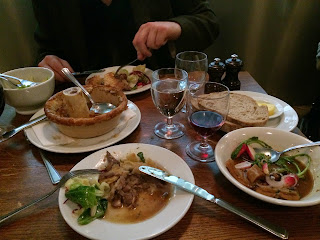 Posted by Unknown at 9:15 pm No comments:

Foxlow is a dark, hipstery hideaway in Clerkenwell, the other side of the road from St John, just up from Smithfield market.

It is very very dark, and very very noisy. It’d be a challenging visual-acoustic combination for my Dad and as we sat down, I mentally made the note never to bring him here.

Sartre and I, however, enjoyed it enormously.

The cocktails took a remarkably long time to arrive, as one bar manager battled through an onslaught of tickets that all landed at once. However, if you’re not in a rush, their Aperol Spritz Slush Puppie is probably worth the wait. 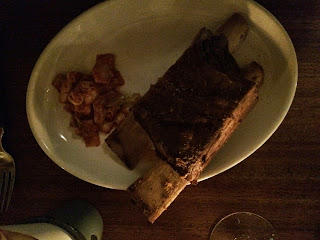 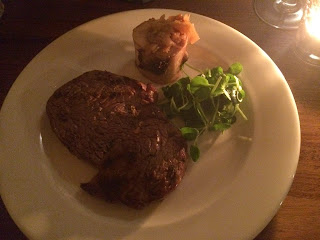 There is no doubt that sitting on the upper deck with its balcony that looks down to the restaurant below is noisier than setting up a table for two in the middle of Kings Cross station.

However the food is delicious, a bit naughty and very comforting. We had rib fillet steak and beef short ribs, cocktails and red wine.

The side order of fries with chicken salt deserve special mention. Chips with a sprinkling of pixie dust.
Posted by Unknown at 8:28 pm No comments:

A few Sunday mornings ago, Sartre and I went to Maltby Street market to have a poke around the antiques and bric-a-brac shops and to find some delicious things to eat. (We did - Bad Brownie and Hiver beer were amongst our spoils).

St John Bakery Room at Maltby Street is the only one of Fergus and Trevor's estate that we've not set foot in. We didn't ponder the other options available to us for long.

I was really in the mood for an Old Spot bacon sandwich, which I discovered is renowned for good reason. Sartre had the low-cal breakfast option of Eccles cake and Lancashire cheese. 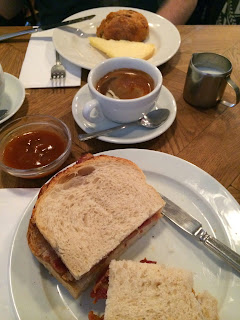 It's a great relaxed space, serving the exquisite stuff that you know and love St John for.

We couldn't bear to leave without a few of their doughnuts, which were piggishly consumed in the privacy of our flat later that morning. 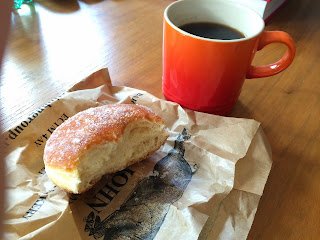 Posted by Unknown at 6:38 pm No comments: