We made a beeline to try Sharp’s Brewery’s collaboration with Nathan Outlaw at The Mariner’s pub in Rock. We drove down to Cornwall from London that morning, parked in Padstow harbour car-park, and hopped onto the ferry over the Estuary. We were the first ones in, with empty stomachs and high hopes at the strike of 12 noon.

And our pilgrimage was justified. We ordered far too much, but heroically worked our way through it.

Here was the best local produce, simply done in tuneful combinations, and matched with Sharp’s beers. 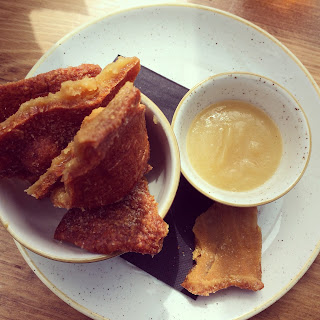 We made short work of Cornish mussels in Shandon stout and orange. 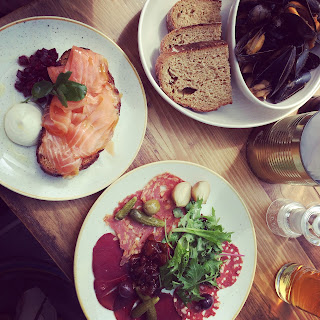 We greedily dispatched Rob Wing’s smoked salmon with horseradish on toasted sourdough, alongside a selection of Deli Farm charcuterie with pickles.

Sitting at an outdoor table on the pub’s terrace, we drank it all in - the food, the drinks and the view over the estuary. As a kick-off to a week’s holiday in Cornwall, we couldn’t have left more satisfied. 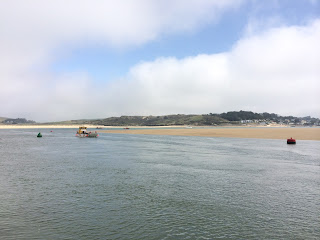 Posted by Unknown at 6:39 pm No comments:

Gingerline is a secret supper club. It creates madcap fictional worlds in which it serves a themed dinner to big numbers. They call what they do a ‘nomadic restaurant and art space.’

It’s called Gingerline because it pops up in locations along the Overground (gingery orange in colour) in East London. The Gingerline team set their dinners in warehouses and other disused buildings, which they transform through inventive props and dressing, sound effects, lighting, and even staff who are remain in character and period throughout. Such committed players are these that you can imagine them maintaining their preposterous accents and personas even if there was a sudden evacuation.

On the date of your attendance, Gingerline asks you to base yourself close to the tube line of their decree at 6pm – in our case, unusually, Gingerline had departed from the Overground in favour of the Jubilee Line. Then on the strike of 6, the organisers text you with the address of the dinner (near a station on that line) and the password to gain entry.

You are sworn to secrecy, and it is strictly bad manners to tweet, instagram or gain kudos by any other social media platform until after the event has finished its run, to avoid spoiling it for subsequent diners.

Before I go further, I should pause and square up to the elephant in the room. Gingerline is, of course, deeply polarizing. Either you admire the concept, the novelty and its irrepressible joie de vivre. Or you view its hipster credentials and oath of secrecy as irritating at best or, at worst, proof that Dan Ashcroft was right and the idiots did rise.

I put myself in the congregation of Gingerline believers, so Sartre and I intrepidly met at London Bridge and were smug at the ping of the text message at 6pm, revealing the location as a minute’s walk from London Bridge.

On the evening that we attended, Gingerline’s concept was ‘The Lost Gardens of Gingerline’.  This was dinner as imagined by the lovechild of Grayson Perry and Capability Brown. It was set in the fictional world of Lionel, eccentric owner of a stately home and capacious gardens in the 1920s. Sort of The Secret Garden, if it had been set in Hoxton and peopled with wealthy urbanites wearing Apple watches and flatforms. 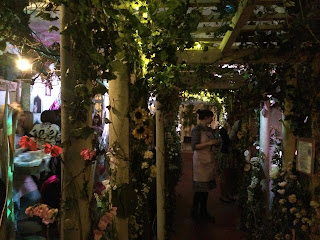 Once we had found the location and whispered our password, we were pointed down the street and behind a building to the location for dinner.

We sat amongst bee hives and arbours, awnings and aviaries, in a garden of sensory overload. Gingerline is big into communion and for us this meant sharing a table of four with two very nice but perfect strangers. We were sitting in an area underneath the treehouse, which required you to duck to get into it.

The actors-cum-waiting staff assumed the roles of Flavourologists and worked the room, in eccentric voice and costume, concocting mini cocktails and potions for your table. 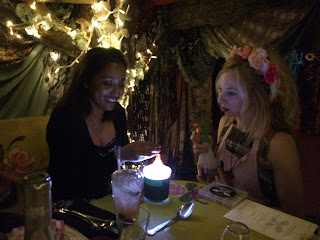 There is one set menu for everyone and the food brought the theme alive.

We started with a picnic basket of savoury goodies, including an onion & thyme muffin, salmon and mustard ice cream and spiced popcorn. 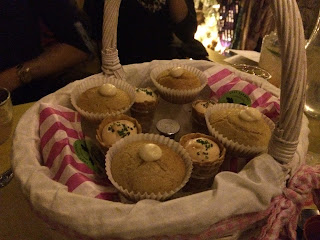 There was Pumpkin and Smoked Haddock Soup, dubbed Boating Pond Soup - a little on the lukewarm side but perfectly serviceable. 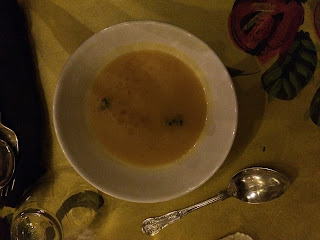 This was followed by Duck and Vegetable Ragout, which was delicious, and rounded off by The Bee Tamer, a Honey Parfait, Poached Pear and Butterscotch Granola. 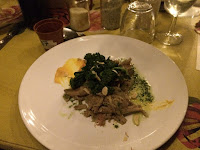 The toilets were called ‘Composting’ – great adherence to the concept, but it did bring a wrinkle to the nose.

The food is evocative and inventive, but undoubtedly plays second fiddle to the experience. It’s as if you’re maxed out on sensory overload from your surroundings. There’s nothing left to give to the food.

Gingerline is hipster Hi-de-Hi where one must get into the spirit, or go home. To enjoy it, you have to surrender your cynicism and embrace the performance. I did, and had a very memorable evening as a result.

Posted by Unknown at 6:09 pm No comments:

The Pig is a picture-perfect restaurant with rooms in the New Forest. After a recent stay at Lime Wood, we visited for lunch before heading back to London.

The Pig’s pull, apart from as a backdrop for endless photo opportunities, is its 25 Mile Menu. And much of their produce comes from their own stately grounds. They keep pigs, chickens and quails, they have an on-site smoker, they forage, and keep a well-stocked kitchen garden with fruit cages.

The setting is a Boden photo shoot waiting to happen. The Pig is immensely handsome. A sweeping driveway draws you towards an immaculate mansion house. The interior is all bay windows, squashy sofas with gay cushions, grand gilt mirrors and Victorian chequerboard flooring. 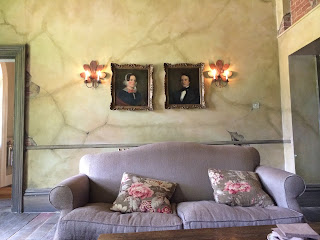 I half expected the large front door to swing open and reveal a young Nigel Havers, in a 20s period drama, clad in tennis whites ready for a game. It’s wholesome and handsome and oh-so-very British. 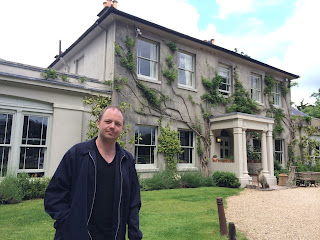 The visual loveliness continues into the restaurant, which is housed in a restored glasshouse, complete with tumbling plants, mismatched shabby-chic floor tiles and doors flung open to the kitchen garden. 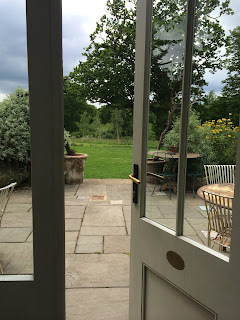 And so, on to the food.  The menu is a delight, impishly categorised by headings like, ‘Piggy Bits’ and ‘Literally Picked This Morning’.

Local makers are named and celebrated, such as “Mr Bartlett’s chipolatas,” “Sopley Farm asparagus” and “James Golding’s smoked salmon” (the latter being the Head Chef of The Pig, referring to his endeavours at the smokery housed in the grounds).

There are great and unusual dishes on the menu, including a Bath chap. A touch Simon Hopkinson, a touch Fergus Henderson.

I ate Asparagus and Goat’s Cheese on Sourdough Toast to start. Humble ingredients transformed into something really delicious due to their freshness.

I moved on to the Elephant Garlic Scapes and Pancetta Risotto. A little too light on the pancetta for my liking – it was wafer thin and almost melting into the risotto –
but still an artful, delicious plate of food.

Sartre had the Greenford Farm Pork Fillet in Vegetable Broth with Toasted Hazelnuts.

The food is undeniably fresh, thoughtfully sourced and thoughtfully prepared. Indeed, The Pig is faultless in idea and execution.

But, somehow, it’s a bit too pleased with itself to be entirely likeable. A bit self-conscious, a little too primped and preened. I admit to being exceptionally picky to find this fault, but something didn’t work for me. The Pig has the feel of a place on best behavior. The restaurant equivalent of Emma Watson, perhaps.
Posted by Unknown at 5:38 pm No comments: