Eating at the Sportsman is like being invited to dinner by a professor from a John Irving novel, who has a summer house on the shore. (Okay, a professor who has a Michelin star…which might be stretching the plot a little. Even by John Irving’s standards).

The restaurant is housed in a light, summery old house, perched on a cliff.

The staff, in check shirts and jeans, greet you as if friends.

If you’re on the tasting menu as we were, you’ll arrive with the rest of the 7pm sitting. Ahead of the a la carte diners arriving, it feels a bit like a private party, as everyone bustles through the doors at the same time, removing coats and plunging into drinks and chit-chat at tables.

The restaurant is makeshift and ramshackle – our seats were wicker armchairs with cushions that you sunk into, like cast-offs from a 90s conservatory.

But don’t let the guileless front-of-house fool you. The idiosyncracy is a great bluff of course. Because the food tears out of the kitchen, as low-key as Lady Gaga on Halloween.

Such that you keep breaking off from conversation to utter things like “that is the best oyster I’ve ever tasted” and “that is the Angelina Jolie of attractive plates of food.”

The glorious breads of many hues and grains, with bright Seasalter salt crystals in the accompanying butter.

The oysters that arrive on their very own beach of seashells. 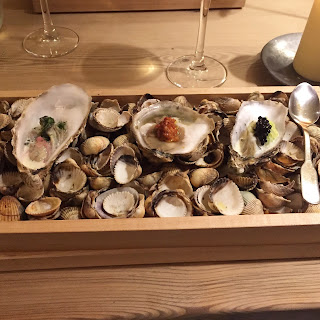 The crab, carrot and hollandaise – a reduced crab cocktail in a glass.  A creamy wonder with the taste of the sea shot through it.

The mushroom and celeriac tart, which looked like a dessert and combined the salty tang of the mushrooms with the richness of a raw egg yolk that split and flooded the plate as you sliced into it. 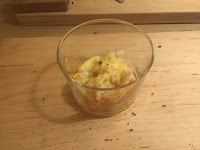 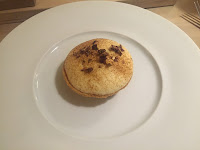 The slipsole in seaweed butter - stubbornly simple in presentation and as moreish as it sounds.


The roast saddle of venison was a well-timed plate of hefty smoky flavour, barging in between the fish dishes and asserting itself.


The bramley apple soufflé with salted caramel ice cream was a tad filling as the finale, but had the desired impact as it arrived at the table, tall and magnificent wearing its coat of icing sugar.

There’s something about the informality of the surroundings that makes the food seem even more miraculous.  One look at the interesting paintwork in the toilets and you’ll catch my drift. 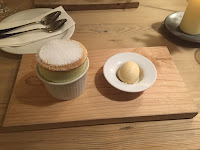 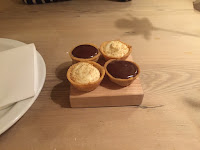 The manager did his bit round the tables towards the end of the meal, asking where we came from and what we had enjoyed. He took our praise very modestly - well-used to it I suppose.

And that's the thing about this restaurant that its many accolades can't really capture. Of course the food is out of this world. But it was the genuine bonhomie, the authentic passion of the whole team for what they're doing here. In this unassuming space down an unassuming lane.