You know the bit in The Thick Of It when Glenn Cullen resigns and then rampages round the office, slamming all of his colleagues?

And of special advisor Emma Messinger he says: “You’re just a standard-issue posh bitch. That’s it.”

Well, that’s how I felt about The Honours.

Does the job but not very distinctive. An ersatz Corbin & King in a well-heeled part of well-heeled Edinburgh.

The décor is decadent.

The staff are a bit formal.

The food is a bit fussy. 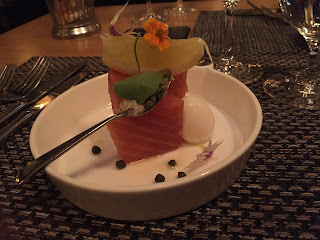 I hate restaurants where you feel you have to stop talking every time a waiter approaches.

It was that kind of place.

The crab served in a martini glass was 90s naff. 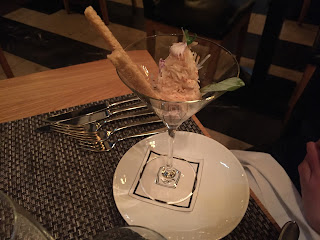 As it was placed before me with hushed importance, I’m almost certain I heard Harry Enfield say, “I am considerably richer than you.”

This is the restaurant of famed chef Martin Wishart, and I could see that there was good DNA here, deep down.

It’s just a shame they buggered up good ingredients with hackneyed presentation and delusions of grandeur that even the Peaky Blinders would think was a step too far.

But Jay Rayner loved it. So what do I know?
Posted by Unknown at 1:20 pm