On its first official night of trading, following a soft launch for a few weeks, the fit-out is immaculate and Anzu is giving off the restaurant equivalent of ‘new car’ smell.

We arrive at 7pm on a Monday night that will prove too cloudy to see the supermoon, for a spot of Japanese to celebrate our anniversary.

Anzu is a new addition to the Tonkotsu stable. It’s pitched as a smart but affordable Japanese brasserie, and it feels like their fight-back to the Shurya chain. The two have much in common in terms of the sleekness of décor and service. 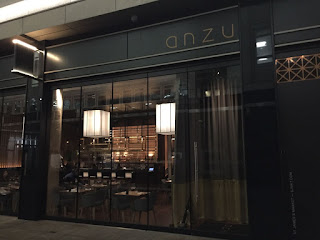 Anzu means apricot, which is a misnomer. It’s nothing like a squidgy, slightly furry fruit.

The food is very nice but rather unchallenging.

To its credit, there’s a generosity of spirit here. That might be a show of opening night goodwill, which may harden and shrink over time. But I found it to be good value.

The Teishoku main courses were substantial.

I had a generous portion of salmon teriyaki. The fish was good quality and deliciously seasoned. Sartre’s seafood katsu consisted of two big pieces of white-fish and a giant prawn, lightly tempura-battered. We each had a big bowl of rice, that I had no hope of finishing, a well-dressed miso soup and some seriously moreish pickles.  Our little pot of green tea was refilled for free, several times. 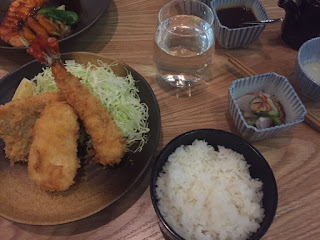 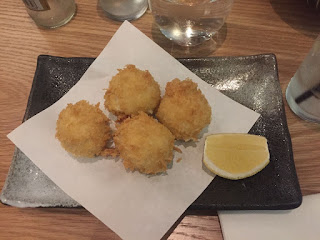 We saved room for a very pretty apricot and blackberry cheesecake, the tangy fruit offsetting the creaminess perfectly. Despite its perfect presentation, it had a touch of the pre-formed about it. Like something you would get served in Emirates upper class. 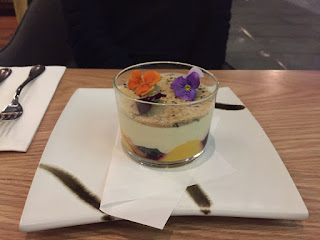 Afterwards, as we walked through the cranks and tourists in Leicester Square, we mused on Anzu’s chances of success.

Sartre is convinced it’s a bad site. And that Planet Hollywood as your nearest on-street marker is not a good thing.

He may have a point. The restaurant was quiet – four other tables were in.  But it was a Monday night in that mid November deadzone between bonfire night and Christmas. Often a quiet period, as people tighten their belts before the excess that December wreaks on your wallet and your waistline.

I’m minded to see what the rest of the St James's Market redevelopment brings. Once finished, it might bring the footfall that Anzu deserves.

We concluded that we hope they do well.  Perhaps partly to assuage our guilt about accidentally smashing an expensive looking soy sauce dish on our way out.
Posted by Unknown at 8:40 pm