Sartre and I visited the chic San Sebastian for a couple of nights after our wedding with a focused agenda. To eat pintxos and go to one of the three 3 Michelin star restaurants there.

San Sebastian is a sophisticated shrine to food on the Bay of Biscay. It has the most Michelin stars per head or per square metre, depending on the survey you’re reading.

The local obsession with good cooking and eating is as alive today as it was when San Sebastian first emerged as a culinary hotspot. 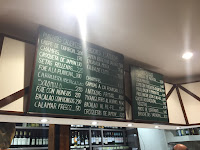 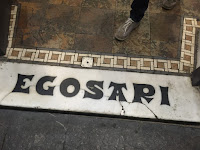 Its pre-eminence as a foodie destination might be to do with its local bounty. San Sebastian is enviably well-endowed when it comes to local produce. From seafood and meats, to chocolate, cheeses and wines, most bases can be covered within a stone’s throw from the town.

It might also have to do with when well-to-do Spanish and French families first hit upon going to San Sebastian for their holidays. Chefs followed the money, and soon the town was attracting top culinary talent.

On the Pinxto Hunting food tour run by San Sebastian Food, our tour guide Lourdes offered a social reason behind the growth of pintxo bars & restaurants. Because Spanish apartments tend to be on the small side, Spanish people don’t invite friends to their homes for dinner parties. Instead, they meet (and eat) on the street.

And in that spirit we ventured out into the balmy evening to eat a curated selection of the best pintxos with accompany wines. 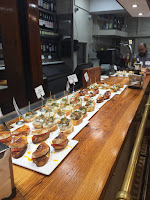 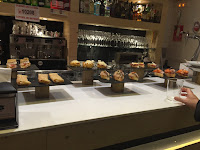 The value in this tour lies mostly in having the rules of getting by at a pintxo bar spelt out to you. As Lourdes demonstrated, the worst thing you can do is be polite. Instead, use chin and elbow to make your presence felt at a crowded bar.

The process of pintxo freaks out a lot of tourists. The trick is not to be duped by a large plate, but instead take a small plate and eat what you fancy. At the end, you pay for what you took, deduced by the bar owner’s eagle-eye and corroborated by the detritus on your plate.

We ate everything from fabulous rare steak, to spicy sausage, to fake baby eels. Apparently, painting strips of white fish with the markings of elvers is big business here, tapping into local demand for a delicacy that is hard to come by. 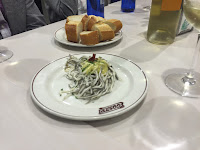 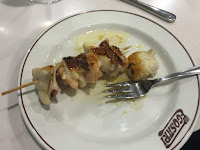 We ate the Basque Region’s answer to crème brulee.  We were shown how to ‘break’ the effervescent local wine Txakoli by pouring it from height. We learned how the Gilda pintxo earned its name and more importantly, got to devour it – a near perfect skewer of olives, guindilla peppers and anchovies. 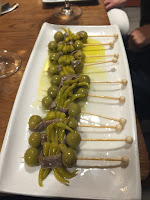 We ate substantial pintxos, much more the size of a hearty starter, of creamy fondant potatoes and mushrooms. We ate rosy pink duck, alongside kebabs of prawns, monkfish and ham. 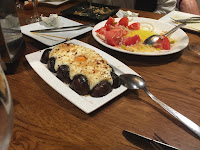 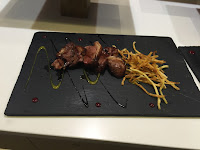 We stopped outside one of the city’s many gastronomic societies, which have played a large part in the development of San Sebastian society and foodiness. These are private clubs attended by men mostly (until recently) where the club members take turns cooking dinner for each other. After eating the costs are calculated, and members all chip in, according to a trust system.

There’s a patriarchal flavor to these clubs and women are still forbidden from some of the societies. Lourdes told us that her mother never minded her father spending his nights at his gastronomic society, since it meant he couldn’t be out womanizing.

In this way, these gastronomic societies are somewhere between a British golf club and working men’s club. A social lifeline, a focus on food and company, and a piece of living history.

We were certainly full and probably a little bit tipsy by the end of the evening. And not a patatas bravas in sight. Which, in San Sebastian, is the sign of a good night.
Posted by Unknown at 10:56 pm