I am going to borrow from Russell Davies here, whose book Egg, Bacon, Chips & Beans is well worth a read if you’re a fan of the British caff. On visiting the Shepherdess Café, on a dark December morning, he remarked on it glowing like an Edward Hopper painting. I reproduce his photo here, so you can appreciate what a good observation that is. 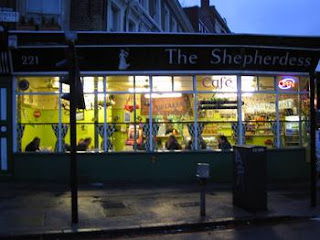 If you are to take one thing out of this review, it should be this. My boyfriend’s breakfast was so big, it came on two plates. (Three if you count the plate of toast).

He manfully opted for the Cop the Lot. A lumpy sea of beans came on the separate plate, because his first plate was packed solid with black pudding, bacon, sausage, hash browns, mushrooms, tomato and eggs.  There were the traditional (for the Shep) few chips - four in number actually - as if they had fallen out of the fryer and been added as garnish, rather than deliberately placed there as a component of the meal.

It really was a plate to ‘ooh’ and ‘aaah’ over – a bit like if someone brings a cake with candles to the table. You just want to get a look at it and take a snap.

I rather modestly went for sausages, hash browns and tomatoes with white toast.  Despite it being a third of the size of his, it still very successfully kept hunger locked up til lunch.

Note the artful scoring of my sausages in the photo. I’m not sure this is a cooking technique that the Cordon Bleu would advocate but it certainly makes eating easier – it gives you a ready made point in which to plunge your knife. 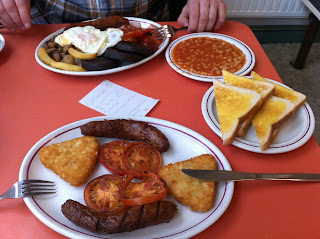 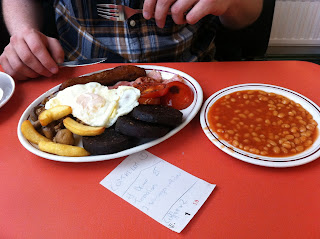 The Shepherdess is my local and I am very fond of it. There are few places that combine pictures of the glitterati who have breakfasted there (All Saints, Barry from Eastenders, Jamie Oliver) with a sign telling workmen to keep their boots off the seats.

It’s incredibly well-appointed. Bang on the busy City Road, and bathed in light from the windows, you feel like you are in a goldfish bowl in the middle of a roundabout. There is no bad place to sit in this joint – fact – because of the mirrored backwall, which allows you to see everything.

The staff are sweet. The seats are fixed. The menu is straight out of Goodnight Sweetheart – liver sausage, sardines on toast, tinned salmon.

Your order is greasily written on greasy paper, and very efficiently dealt with at the till by the door when you leave. Personal bugbear of waiting for your bill = neatly avoided here.

I noticed on this visit that they have made the menu a touch more gimmicky with names for the breakfasts, Little Chef style. Cop The Lot, Veggie Feast, Cinnamon Pancake Girl (OK, the last one was mine).

Yet it remains a traditional place, where an eclectic mix of people take a quick pit-stop in their day. And as such, it’s as much an example of the British condition as it is the British caff.